Criticism, not as judging, but as bringing to life

September 21, 2014 / Eleanor Sandry / Comments Off on Criticism, not as judging, but as bringing to life

I can’t help but dream about a kind of criticism that would try not to judge but bring a work, a book, a sentence, an idea to life; it would light fires, watch the grass grow, listen to the wind, and catch the sea foam in the breeze and scatter it. It would multiply not judgments but signs of existence; it would summon them, drag them from their sleep. Perhaps it would invent them sometimes ‐ all the better. Criticism that hands down sentences sends me to sleep; I’d like a criticism of scintillating leaps of the imagination. It would not be sovereign or dressed in red. It would bear the lightning of possible storms.

Michel Foucault, in “The Masked Philosopher”, on criticism that brings ideas to life. I think that this is what research in the humanities is all about, and it encapsulates how I would like to think and write.

August 13, 2013 / Eleanor Sandry / Comments Off on Contexts, meanings and stories

now we have come to travelers who multiply meanings as they move, we should be wary of getting to comfortable with any single line of analysis. These stories have as many senses as the contexts of their telling. Their tracks point every which way. Odysseus’ oar may also be a winnowing fan, but that hardly exhausts its meanings. Burying the handle of the winnowing fan in a heap of grain is a sign that the harvest is done. Burying a sailor’s oar in a heap of earth is the sign that marks that sailor’s grave. Maybe when an oar stands over a grave it does come to the end of its meanings, for then the traveler’s journey is done. But who would want such closure? “Rabbit jumped over Coyote four times. He came back to life and went on his way.”

I really feel that I should have read this book many years ago, but it was shoved under my nose recently, and this section appeals to me in light of yesterday’s post about windows on the world. Hyde provides some rather beautiful examples of how a different perspective changes the meaning of something.

The point about multiple meanings, and developing a wary eye towards “any single line of analysis” makes a lot of sense to me. However, I also think that it is one of the reasons that I find research writing so difficult. I try to be very careful to see through more than one window (as Mary Midgley suggests) to see more than one meaning, and I then find it very difficult to place descriptions and analyses of the different views together on the page. It is easier in a verbal presentation, probably because the ideas are performed in particular space and time, for a particular audience, and often because there is only time to discuss a few points. In writing it always seems so much more complicated… 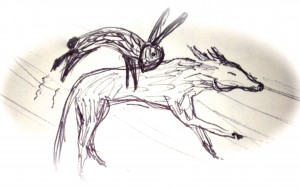 Windows on the world: Chomsky and Žižek

August 12, 2013 / Eleanor Sandry / Comments Off on Windows on the world: Chomsky and Žižek

While Chomsky, at least in his political work, operates most comfortably at the level of empirical data and relies on his encyclopedic grasp of the facts to assault his opponents, Žižek is more interested in the ways people comprehend those facts, in the symbolic laws and regulations that frame their understanding of the world. Thus, if Chomsky emphasises facts, Žižek’s primary concern is the ideological framework colouring their interpretation.

Importantly, these two positions are not as diametrically opposed as they may initially appear. What we have here is not an irreconcilable contradiction but a case of different dimensions. In their remarks, Chomsky and Žižek simply do not inhabit the same plane. They are operating from different levels of abstraction, both of which, I claim, are important and necessary for political struggle.

(Greg Burris, What the Chomsky-Žižek debate tells us about Snowden’s NSA revelations, in The Guardian, Comment is Free, Sunday 11 August, 2013)

Since I am interested in looking at communication from a range of theoretical perspectives (some of which are incommensurable at least some of the time), this article was relevant both because it unpicked an example of communication between theorists who “do not inhabit the same plane”, and because it went on to consider how useful it is to analyse a political situation from the disparate perspectives they offer.

I was also reminded of the work of Mary Midgley and her explanations of the importance of realising that pluralism in science is useful as opposed to being a problem that must be overcome. Midgley equates different scientific perspectives with the range of world maps on the early pages of an atlas, which may show population, climate, political boundaries etc. and therefore appear very different from one another. She goes on to suggest:

We have to see the different maps as answering different kinds of question, questions which arise from different angles in different contexts. … The plurality that results is still perfectly rational. It does not drop us into anarchy or chaos.

In The Myths We Live By, Midgley offers another way of thinking about the idea of pluralism (and this is the one referred to in the title of my post):

another image that I have found helpful on this point is that of the world as a huge aquarium. We cannot see it as a whole from above, so we peer in at it through a number of small windows. … We can eventually make quite a lot of sense of this habitat if we patiently put together the data from different angles.

I am aware, even as I consider the different world views of Chomsky and Žižek, that I place a great weight on the importance of identifying personal or ideological biases and assumptions that colour one’s argument. Therefore, while I might find Žižek very difficult to understand much of the time, I think that this makes me more open to his style of critique, as opposed to Chomsky’s empirical stance which, as Burris notes, “downplays or even ignores his own ideological presuppositions”. However, in spite of my personal bias, I can see it is important always to remember Midgley’s warning that “if we insist that our own window is the only one worth looking through, we shall not get very far” (2004, p. 40).

As I mentioned in the previous post one of the plenary speakers at the SLSA conference that has just finished in Portland, Maine, was N. Katherine Hayles, who spoke on Friday night.  As this was after my panel I was still recovering from “presentation stress”, so off the top of my head I find that I can hardly remember what happened at this session, except for the fact that it was closely related to the theory found in Hayles’ book, My Mother Was a Computer.

Given that the conference theme was “CODE”, it was unsurprising that Hayles’ talk stressed the need to take computation into account as fundamental rather than just peripheral to our understanding of the world. Hayles therefore spoke about concepts such as hierarchy versus heterarchy (?), intermediation, complexity and emergence.  In particular she drew on the work of Douglas Hofstadter, not so much on his first tome Gödel Escher Bach, but more on his second, Fluid Concepts and Creative Analogies: Computer Models of the Fundamental Mechanisms of Thought, and spoke about understanding cognition as recognition and the importance of analogy.

Having talked about programming and different codes, Hayles then moved to consider the idea that “the meaning of information is given by the process that interprets it” (Fredkin), and therefore an understanding of objects coming from processes.

These ideas were then brought together as Hayles talked about computers as providing a level of subcognition and the ground for analogies, which then allowed humans to work at the level of creating analogies between analogies.  This supports the understanding that as humans engineer computers, computers re-engineer humans, in a constant process of coevolution.

Then there were some examples, all taken (I think) from Volume 1 of the Electronic Literature Collection, which looks really interesting.

Hayles also talked about the way that in the media intensive environment that young people experience they develop a talent for hyperattention, which does not prepare them to embrace the still more valued ability for deep attention that most university literacture courses stress in the close reading of novels.  This is something I have heard talked about before, and yet I still often hear scholars complaining about their students not reading the novel they have been set each week :-)!

Anyway, I hope that gives some sort of impression of what the plenary contained, incomplete I’m sure, but I hope not incorrect!