November 13, 2014 / Eleanor Sandry / Comments Off on ICSR Video and Roundup

I enjoyed the International Conference on Social Robotics a great deal, and I would now love to attend another robotics conference. Unfortunately, I’m still unsure about whether any paper I pitched would make it through review, because it would likely be so radically different from most of the papers being submitted. I suspect I will need to look for other opportunities like the Robots and Art workshop to help me with this, by allowing my work to exist on the edge of a main conference programme. The video of my presentation has now been uploaded online:

All the presentations from the workshop are available here.

Although not all of the research discussed during the rest of the conference was of direct interest to me, there were lots of things that I will take away from the papers that were presented and the posters that I saw. I’m planning on writing about some of the designs and concepts I saw here early next year.

It was clear to me as the conference progressed that my home really was at the Robots and Art: Misbehaving Machines workshop. All of the presentations on the workshop day were thought-provoking for me, and I loved the mix of art, design, technology and broad ideas about social interaction with humans. It was particularly good to present to some of people whose robots have inspired me to think and write about communication in recent years, and it was even better to find that they appreciated my analysis.

Although I have met Mari Velonaki twice before, it was great to see her again, and to hear a little about her more recent projects and the new collaborative laboratory venture that has just begun. I’m definitely planning another trip to Sydney so that I can catch up with Mari again properly and see what’s going on for myself.

Another high point was meeting Guy Hoffman, and actually getting to talk to him at some length about fluency and interruption in communicating with robots of all different forms. I was greatly relieved to find that my understanding of his robotic desk lamp AUR’s interactions with humans was broadly correct, but I was also interested to gain a new insight into the underlying rhythm that was at work behind its responses to the task and a human’s instructions.

October 27, 2014 / Eleanor Sandry / Comments Off on Slides for Communication and Otherness in Robotic Art

As promised in my last post, here are the slides from the talk I gave today at the Robots and Art – Misbehaving Machines workshop at the International Conference on Social Robotics 2014 in Sydney.

The artistic practice approach to designing robots is not generally focused on creating machines that are completely predictable and reliable. From some perspectives, in particular those that assume familiarity is key in supporting communication success, it might therefore be deemed as unlikely to result in the development of robots that support rich social interactions.

This presentation breaks down this assumption to argue that robotic art installations, where interactions between humans and robots occur even when the robot is overtly strange and other-than-human, provide excellent illustrations of communicative encounters, which may develop into longer interactions. In particular, this presentation highlights the importance of considering nonverbal communication, the dynamics of communication systems and the importance of interruptions, in recognising the communicative potential of non-humanoid robots.

Rather than attending only to what is easily understood, precisely presented and flowing, the importance of misunderstanding, ambiguity and disruption is emphasised. An analysis of encounters between visitors and robots created by artists therefore supports a reconsideration of the position of otherness in communication to invoke new understandings of what it might mean to be social even outside installation spaces. 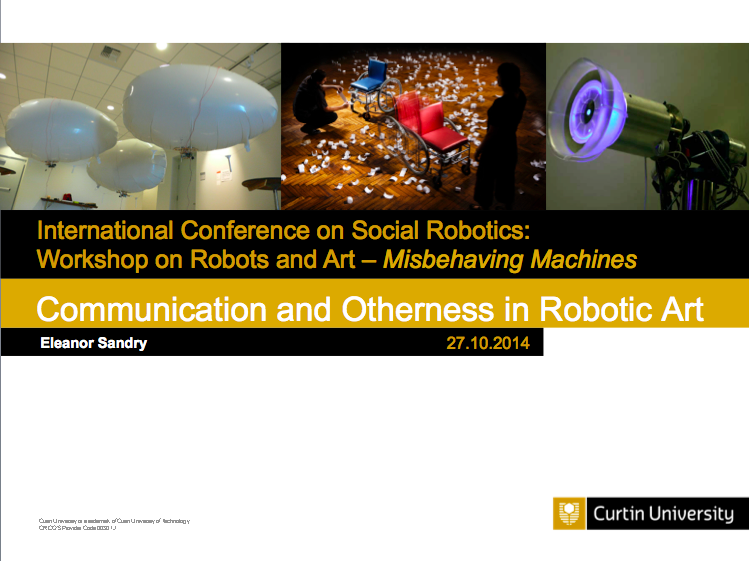 This year the Department of Computing at Curtin, in association with the Perth Artifactory, the US National Institute of Standards and Technology and other international partners, is hosting the 2014 IEEE Robotics and Automation Society Response Robotics Summer School and Workshop.

I am presenting tomorrow (Monday 29 September), in a joint session, “Art and Robotics”, with the performance artist Stelarc founder of the Alternate Anatomies Laboratory at Curtin. I hope that our session will invigorate the attendees, who will already have experienced two hours of talks and discussions, and will probably be desperate for lunch!

Stelarc will be presenting first, and will likely provide a provocative view of the possibilities of robotics as explored in his artistic practice, and I’m going to try to work from those ideas back towards response robotics by looking at the various ways that robots can be understood to communicate. I’ll be talking about social robotics from scientific and artistic perspectives, moving from examples such as ASIMO (Honda):

via The Fish-Bird Project (CSR): 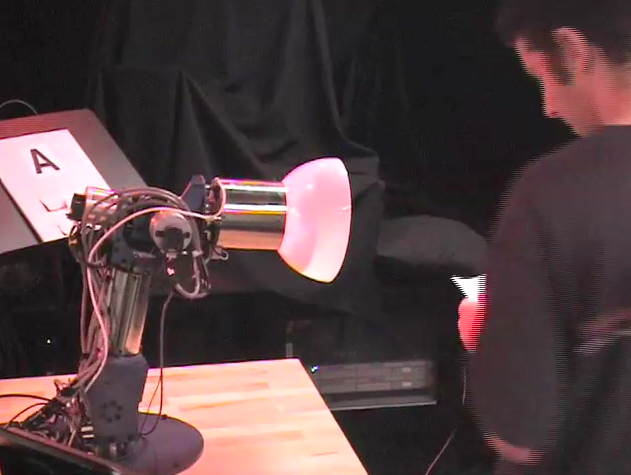 to discuss relations with Explosive Ordnance Disposal (EOD) robots like this Packbot (iRobot) pictured with a soldier:

So, that’s a completely normal presentation trajectory for me, and I’m hoping that it’ll make sense to everyone else!