My book, Robots and Communication, has now been published with Palgrave Macmillan in the Pivot series (electronic books with print on demand). This is the flyer (PDF), with the overview and endorsement etc. 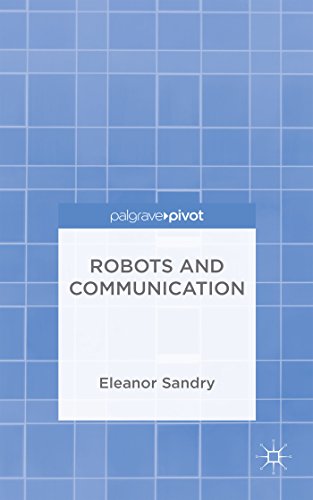 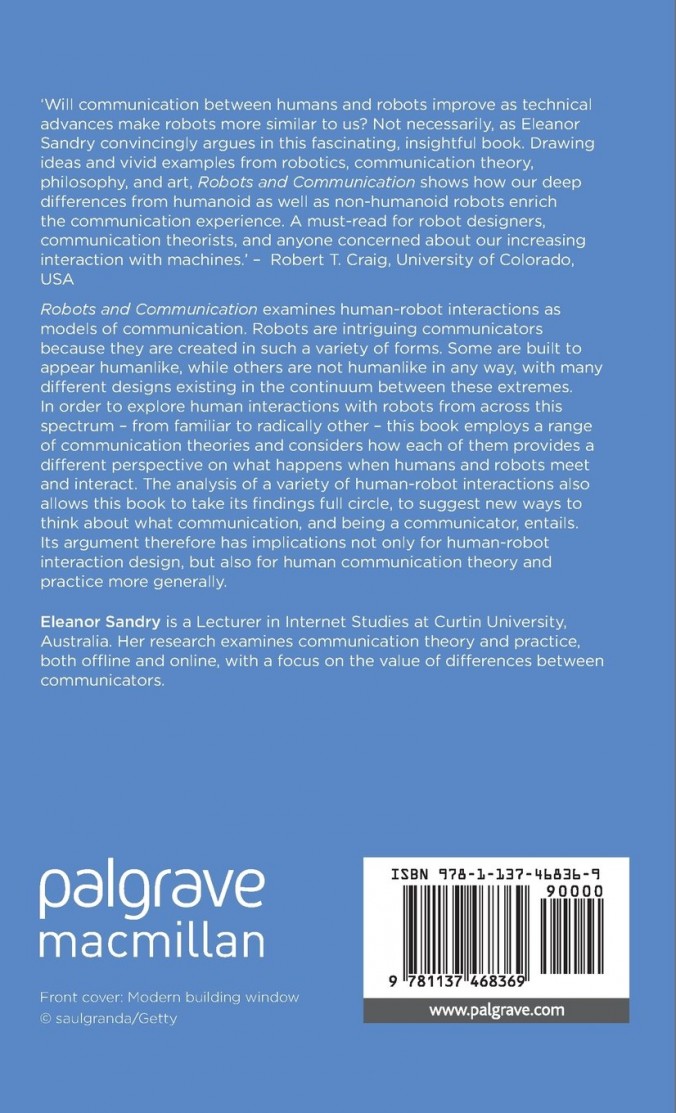 Some information about Robots and Communication is available from the Palgrave website, where you can also download free sample material and request access for libraries. The book is available for purchase from online book sellers including Amazon.com and Amazon.co.uk.

The book is structured in three sections, with an introduction and brief conclusion. These are the chapter abstracts, which give a good idea of the material and ideas that I’ve discussed:

Introduction
In order to prepare the reader for an analysis of human interactions with a wide variety of forms of robot, the introduction first explores what constitutes a robot. It then goes on to outline the different traditions of communication theory that are employed in the book’s analysis. Finally, it explains the structure and scope of the book.

PART I From Data to Dogs

Designing Robots to Communicate with Humans
In Chapter 1, the pursuit of humanlike form is analysed in both fictional and real-life contexts. Amongst other justifications, people committed to building humanoid robots argue that these robots are best suited to work in human environments and to communicate with humans. Two paths in humanoid robot design are considered, but both involve understandings of communication that value commonality over difference. This chapter draws on the critiques of the pursuit of sameness found in the work of communication scholars, which is not much discussed in robotics, to destabilise the assumption that humanlike form is the best form for communicative robots.

Human-Animal Communication
Chapter 2 pauses the book’s consideration of robots to explore human-animal communication, since nonhuman animals are an important part of many people’s lives, acting for some not only as companions, but also as co-workers. Human-animal communication is described in various, often idealised, ways in fiction, but in real-life situations an analysis of human-dog communication demonstrates the importance of attending to the smallest of nonverbal signs over periods of dynamic communication. This chapter highlights the possibilities for humans and animals, in particular dogs, to work together in teams, employing their specific skills to allow the team to perform tasks that neither human nor dog could complete alone. At the end of the chapter is a brief appraisal of the design and development of animal-like robots.

Encountering Otherness
Chapter 3 concentrates on theorising the encounter between human and robot, identifying moments when communication occurs, often using nonverbal communication channels at least initially. It discusses two versions of the Autonomous Light Air Vessels (ALAVs) art installation, within which blimp-like robots interact with one another and with visitors. It also extends Levinas’ conception of self-other encounters to consider nonhumans, including robots, in order to consider how communication can be understood to draw the self and other into proximity while retaining the differences between them.

Stories and Dances
In Chapter 4, the discussion moves beyond the initial encounter, to consider how dynamic interactions support communication with robots where those communications are also framed by a backstory. The focus is on how interactions can be understood in terms of both dialogue and overlapping continuous systems of interchange. Levinas’ theory is further extended in this chapter, to highlight the interruptions in being and in saying that occur in interactions with Fish and Bird, the wheelchair-like robots discussed throughout the chapter.

Collaboration and Trust
Chapter 5 considers what happens when humans and robots learn to complete tasks together as a team. In particular, it discusses human interactions with AUR, the robotic desk lamp. In this example, elements of verbal and nonverbal communication are combined in a dynamic communication that involves paying attention to each other as well as to the task at hand. The chapter considers communication with AUR in terms of a companion species relation, drawing on the discussion of human-dog agility teams in Chapter 2.

Humans, Animals and Machines
Chapter 6 considers the implications of human communication with nonhuman others for the categories human, animal and machine. It argues that, while the boundaries between these types of being are becoming increasingly blurred, they are nevertheless still meaningful. The chapter goes on to consider ways of assigning agency to nonhuman others on the basis of their activity in situations, while also recognising the difference between human activities and nonhuman activities.

Communication, Individuals and Systems
Chapter 7 concentrates on exploring some ideas about the relationship between individuals and systems in thinking about communication. It discusses long-term interactions with robots outside of laboratories and art installations, identifying the value of respect and trust in collaborative partnerships with robots. This is developed into a consideration of how responsibility is shared across collaborative teams, even when the team members are in an asymmetrical relationship.

Conclusion
The short conclusion to this book explains the basis for its somewhat eclectic analysis, which uses a range of traditions of communication theory, as well as considering the overarching conceptions of discrete state and dynamic systems methodologies.

I’ve tried to make sure that Robots and Communication is appealing, whether the reader wants to find out more about communication theory and approaches to analysing communicative situations, or is interested in robotics and wants to explore the possibilities of human-robot interactions with a wide range of different forms of robot.

If you read the book, I’d love to hear what you think, and I’ll be trying to reply to any comments and feedback I receive (whether here or via Amazon sites, academia.edu etc). There are lots of different perspectives that can be taken on communication in general and on human-robot interactions in particular. I’ve put forward a somewhat provocative challenge to consider the potential of differences, even radical differences, between communicators in Robots and Communication, so I’ll be interested to hear people’s response to this approach.